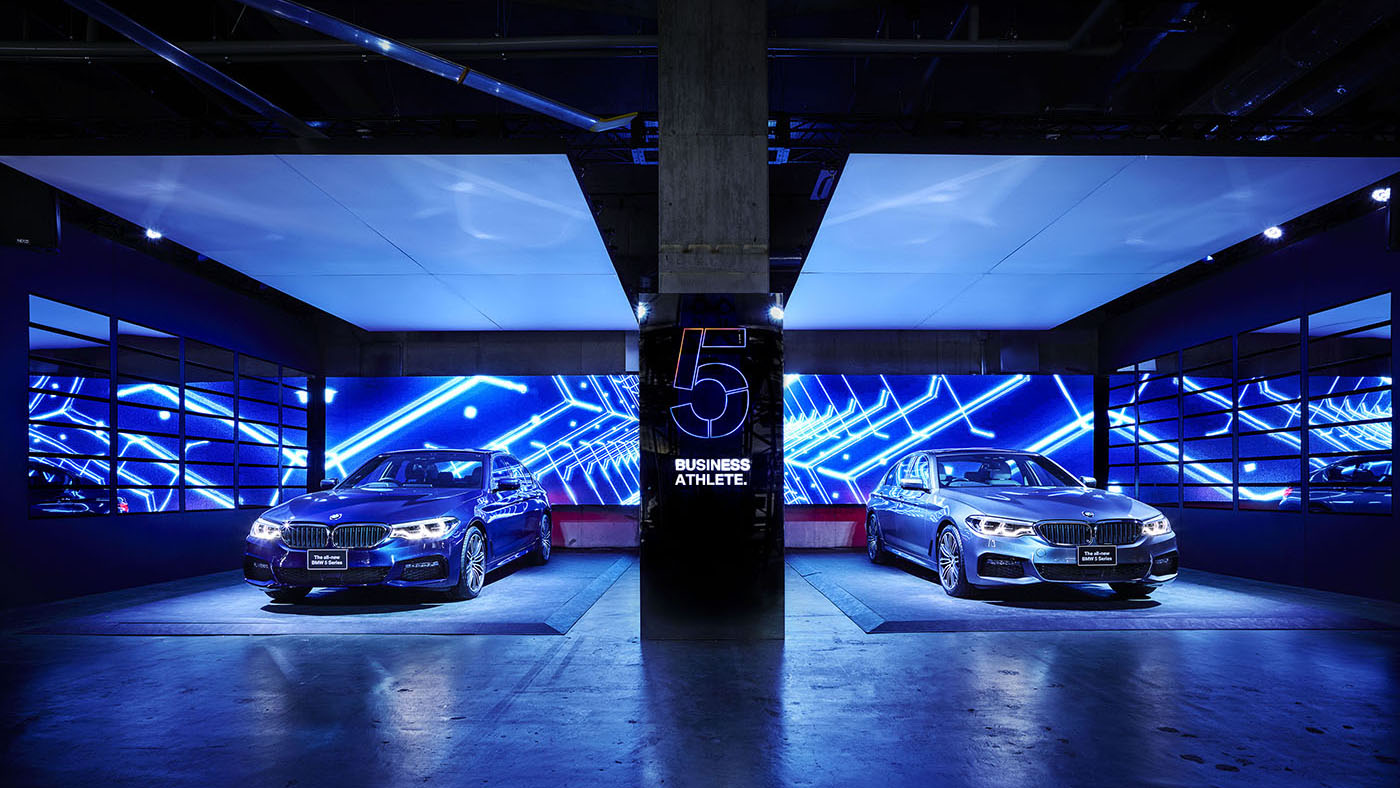 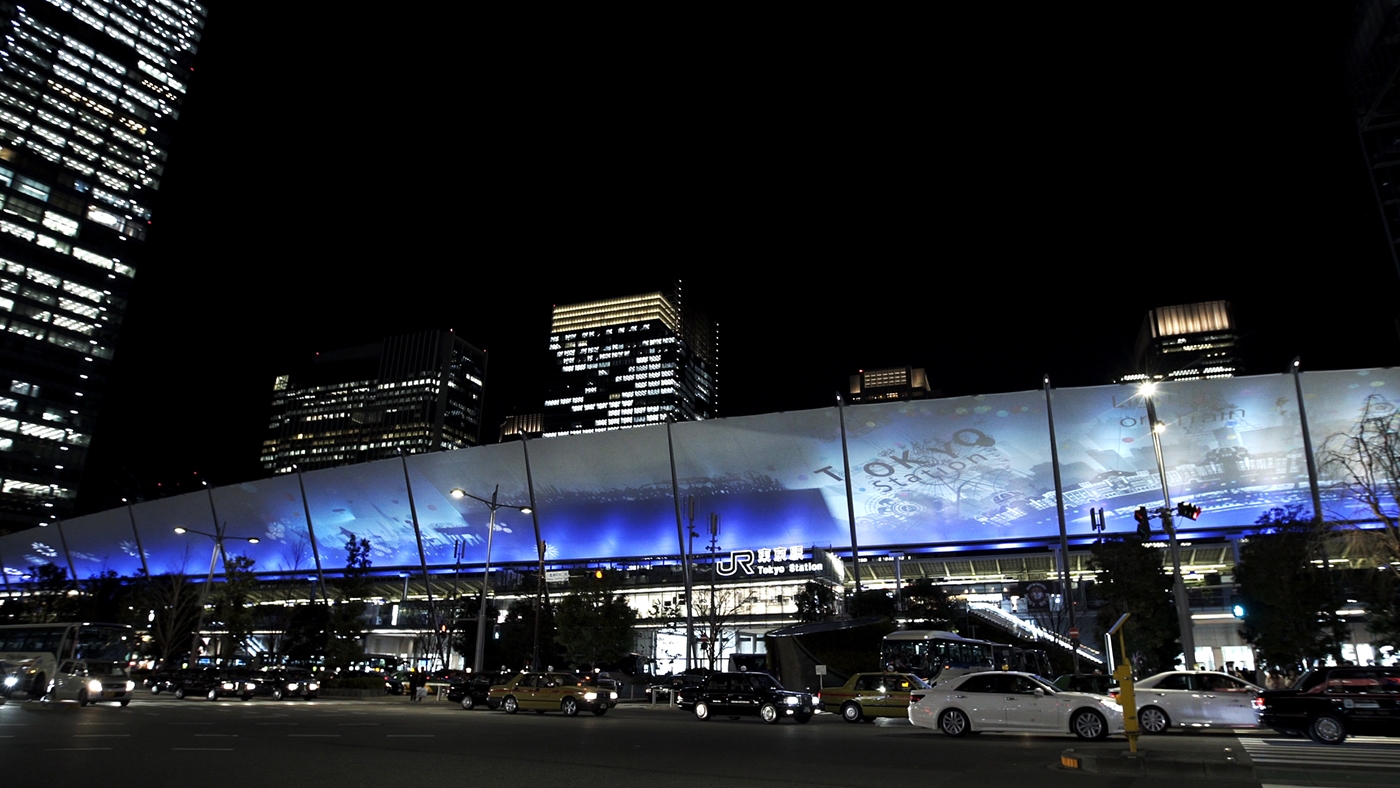 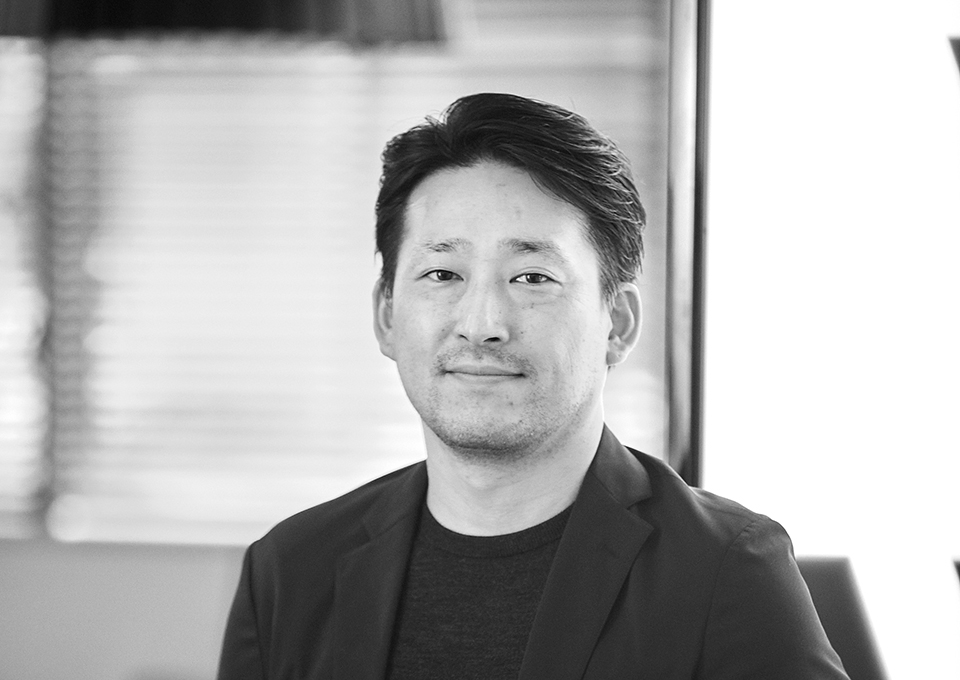 Shigeru involved in various projects, performances, and productions, such as video advertisements, video installations in exhibition spaces, corporate identity designs, and augmented reality productions, based on sensibility regarding motion graphics and video editing skills.
He has a wide array of expressive capabilities, ranging from edgy motion graphics to lyrical videos, and excels at installing these visual expressions in spaces for output that matches the user experience. Shigeru has been taking charge of many long-term projects, such as an installation at a major commercial facility and video production, in recent years.

BMW｜2017
Responsible for video creation for an installation at an event previewing the new BMW 5 Series, themed for the business athlete. Expressed the concept for the 5 Series, a worldview consisting of five taglines, using motion graphics and music.

The entire installation had rotating mirrors to the left and right of the video, and through the coordination of music, lighting, and playback the video intermittently reflected off of the auto, amplifying and expressing in a complex manner the world view of the 5 Series.

Installation｜2016
WOW was in charge of creative direction video production for the installation, “Tokyo Station Granroof Light on Train”. It opened from December 1st to 25th at JR Tokyo Station Yaesuguchi Granroof pedestrian deck and the Yaesuguchi-ekimae courtyard.

“Tokyo Station Granroof Light on Train”
A new platform is coming to Tokyo station, one of the busiest in Japan where many trains come and go on a daily basis. The many lines at the station carry people on their daily journeys and they all create light -- the origin of thoughts and energy. Light dances in the air and is touched by visitors breaking up into “light flowers” and drifting on throughout the Granroof area.

With a total length just over 200m, the Granroof will have 3 areas: “Image Presentation area”, “Interaction area” and “Lighting effects area”. The story in each area will connect seamlessly, where you will be able to enjoy the light space from any vantage point. Also, in the Interaction area, visitor’s silhouettes will be projected in real time, where they can interact with the light from the train.

Hakodate City｜2016
WOW’s first architectural project, Future Center Hakodate and Kids Plaza Hakodate opened in Hakodate city, Hokkaido on October 15, 2016. It has opened as a regional exchange center after two and half years of cooperation with Sony PCL.


We have taken comprehensive responsibility for the establishment of these facilities aimed to revitalize the area. Along with creating contents for the large LED display ‘Media Wall’ requested by the city at the time of project planning, we also designed the concept of the facility, cooperated with Future University Hakodate and worked with students through workshops to design the logo and website.


Hakodate City has been dedicated to disseminating science as the city’s new attraction since 15 years ago, and Future Univeristy Hakodate was founded for that purpose. With the creation of the nation’s first complex systems science department, it has been progressing in the fields of artificial intelligence, advanced technology education and design education. Future Center Hakodate and Kids Plaza Hakodate aim to use science as a base to nurture the strengths (the ability to recognize and solve problems independently) necessary for the next generation to uphold the world of the 21st century. We have called this strength ‘Odoroku Chikara’ (ability of discovering) and used it as the concept to develop these facilities. By utilizing the location in front of the station, we hope to revitalize the area through the development of these facilities.


We have designed content that brings out this “Odoroku Chikara” on the large LED display Media Wall measuring 14m wide and 3m tall, and the 360 studio in Future Center Hakodate. Additionally, we are planning to continue participating in the future, through workshop programs, content creation, as well as support and advice for the facility and city planning.


【Media Wall】
We have produced the contents listed below on the Media Wall. All of them will tickle the intellectual curiosity of children, and were produced with the objective of deepening their experience by interacting with the videos. Details can be found here


The secret of the herd: An interactive aquarium that allows children to learn about the ecology of squids while having fun.


Size and speed: An animated reference book that allows one to experience the size and speed of animals, cars, and bullet trains via full-scale CG.


The deviation of time: An interactive visual expression using one’s own body to learn about “time” and its lag and deviation.


Water fireworks: A water fountain that looks like fireworks and doubles as a clock. Number-shaped water shoots up and explodes beautifully in the air.


Hakodate Musical: A fun video series introducing Hakodate, created by filmmaker Inoue Ryo, who is in charge of the NHK program "Bijutune!"


【360 Studio】
A space to enjoy the interaction of sound and videos.


HAKOUSTIC ORCHESTRA: One of the representative sounds of Hakodate, the rarely experienced pipe organ, can be played at will using your body.


HAKODATE REMIX: A physical DJ application where you use your body to play your own recorded voice. Learn fundamental musical rhythm and notes while having fun.

SLUSH ASIA｜2015
The images projected on the domes condensed participants’ energies into irregularly altering, and explosively enlarging, circles, bands, spheres, waves, surfaces, and textures. The installation exhibited at the entrance of the venue, using 12 laser projectors, served to elate participants’ moods and set the stage as an entrance to the extraordinary space.

About SLUSH ASIA
The international startup event, SLUSH ASIA was held in April of 2015 at waterfront area Aomi in Tokyo. Guest speakers from over 10 different countries and regions, and 50 startup companies from over 22countries and regions gathered for this event. There were about 3,000 participants in total, including, 97 investors, largely international student volunteers, and journalists. The venue was constructed with five semispherical geodesical domes called the “White Rock.”

Book｜2013
This photography book is the complete collection of photographs taken by Ichigo Sugawara since he first began his career as a photographer. WOW was in charge of the production, which is made up of two parts: Blue, selected masterpieces from the 1990s, and Daylight, selected work from 2000 to the present day. Working closely with &Form Maruyama, we gave special attention to the details, including the type of paper used, the font and the print quality. The finished product is a splendid book of photography, featuring pictures comparable in quality to the original prints. Special editions with serial numbers were also produced, numbering just 30 in total. Enclosed in these special editions, can be found one original print and a special WOW – produced promotional movie, all beautifully en- cased in a hard cover.

About the Movie
As part of the screening at the reception, and for the Blu-ray Disc enclosed in the special edition hardcover box set, we created a motion graphics piece; brief moments of the world that photography captures. By connecting these individual moments, a chronological order of events was reconstructed and turned into a motion picture. This animation was created with the aim of allowing people to share the photographer’s view of the world, and gain a sense of the flow of time as he took these photographs.