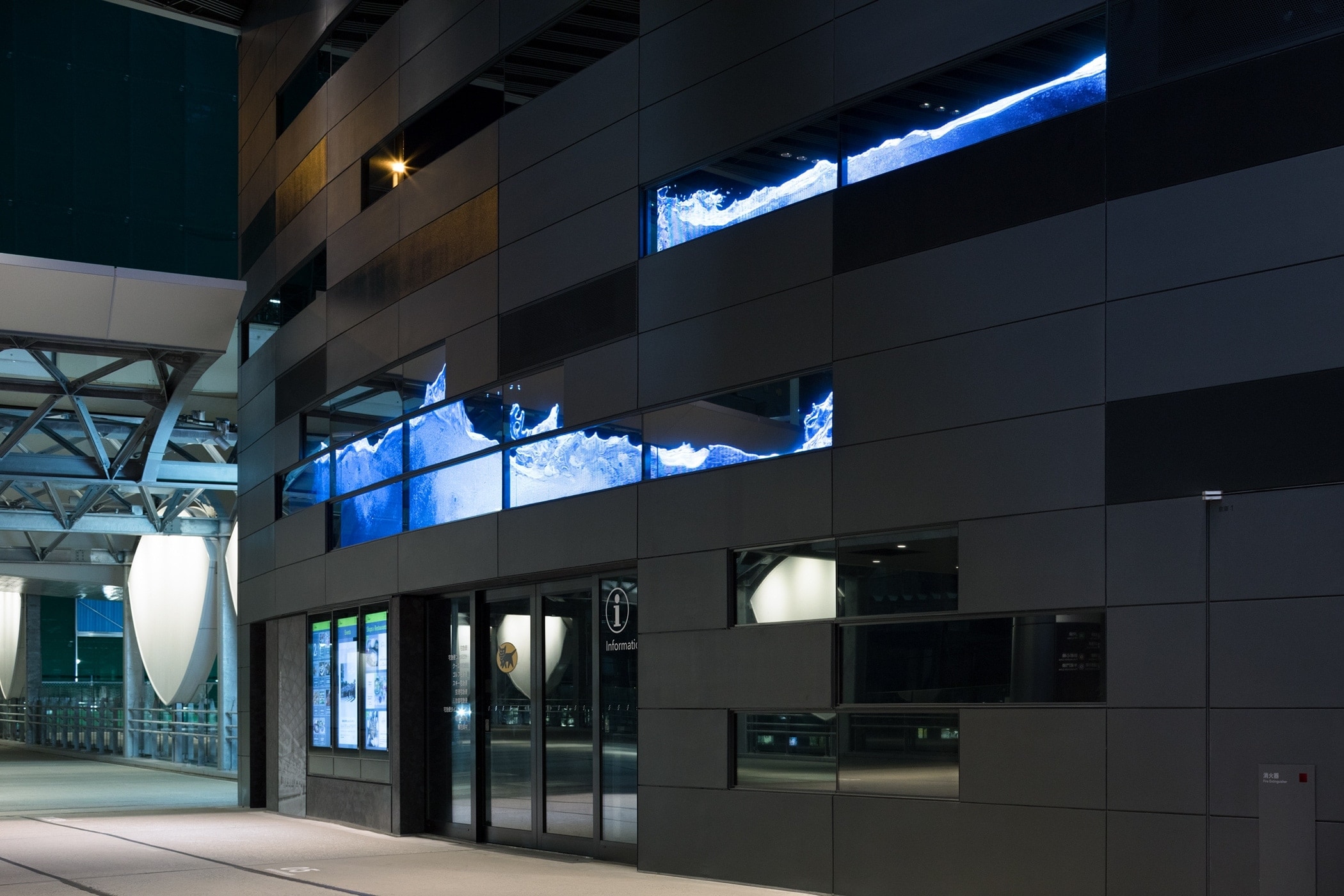 To design the space within a part of the 100-meter walkway connecting the first and second floor in a way that conveyed the originality of the establishment, “Shibuya Stream.” This was to be done through features such as a giant wall projection set up at the entrance of the connecting walkway, a video system embedded into the large staircase which connects to Meiji Street and the presentation of the stair space.

Even the creative process was presented in a unique way that invoked the notion of a “stream of thought” and an original interpretation of “stream” was projected on the wall. On the large staircase where the projection system is embedded, we recreated the form of the streams of natural phenomena, such as waterfalls and streams, in order to create a harmony with the Shibuya river, which flows before our establishment.

We have achieved a high level comprehensive design environment that integrates space, visuals, and sound. We believe that waterfall space will become a new icon in Shibuya.

Background of the Project

Shibuya Stream is a large scale composite facility, created from redeveloping the old Tokyu Toyoko Line Shibuya Station platform, track, and surrounding area. The project began with the concept of creating a new “stream” for the next generation, a “Mecca for creative workers”; a place where new things created through the experiences, interactions, and challenges taken, would be sent out into the world.

The project aims to generate new culture in Shibuya and to bring new life to the Southern Area of Shibuya Station. It is targeted at creative people and is intended as a place that provides them with daily inspiration.

WOW was in charge of the design of the 100 meter walkway connecting the second floor to Shibuya Station, the giant wall projection set up at the entrance and the large staircase connecting the building to Meiji Street. WOW was also responsible for planning the experiences that could be had in the space. 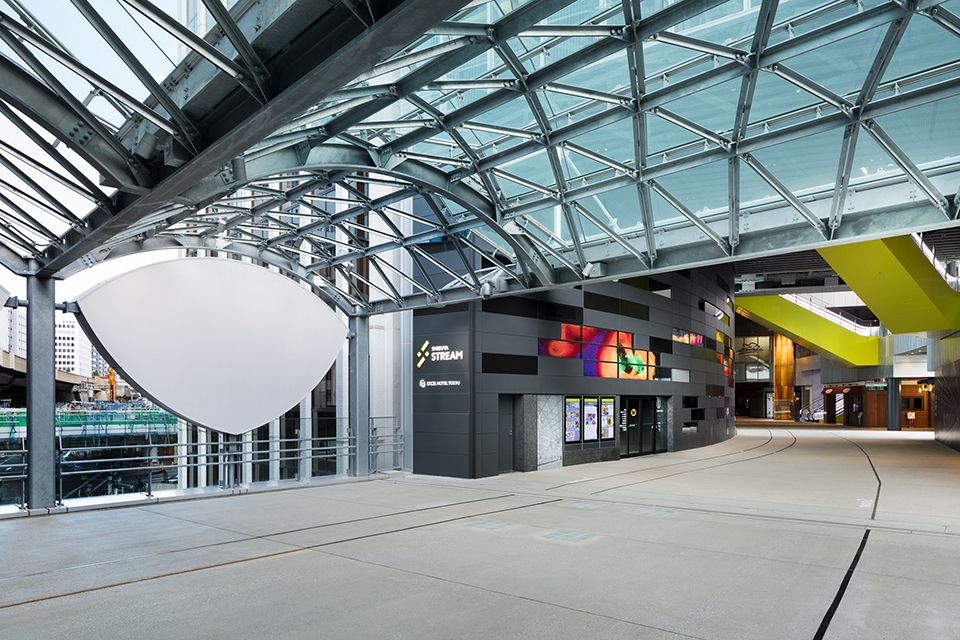 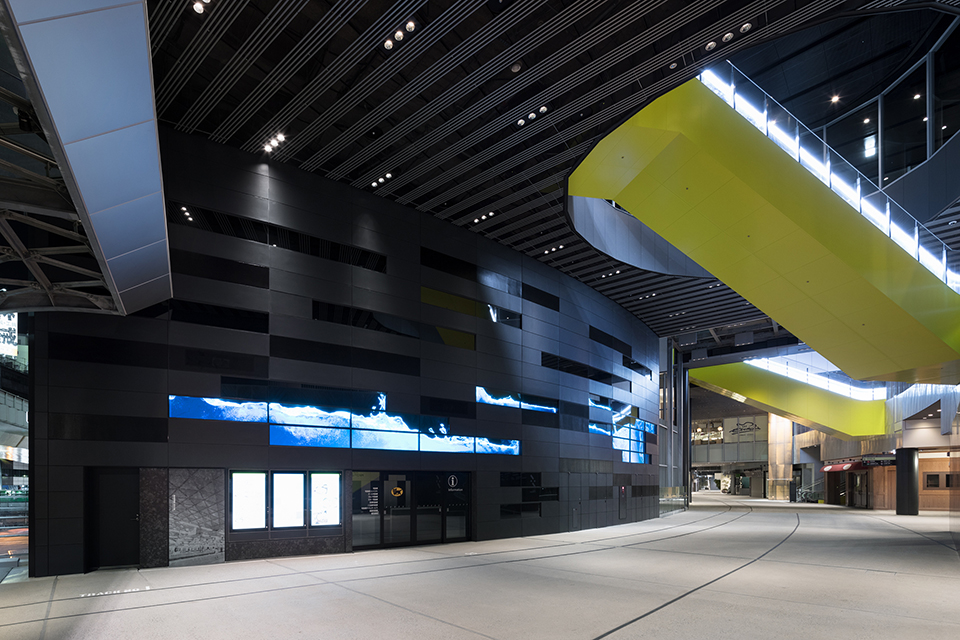 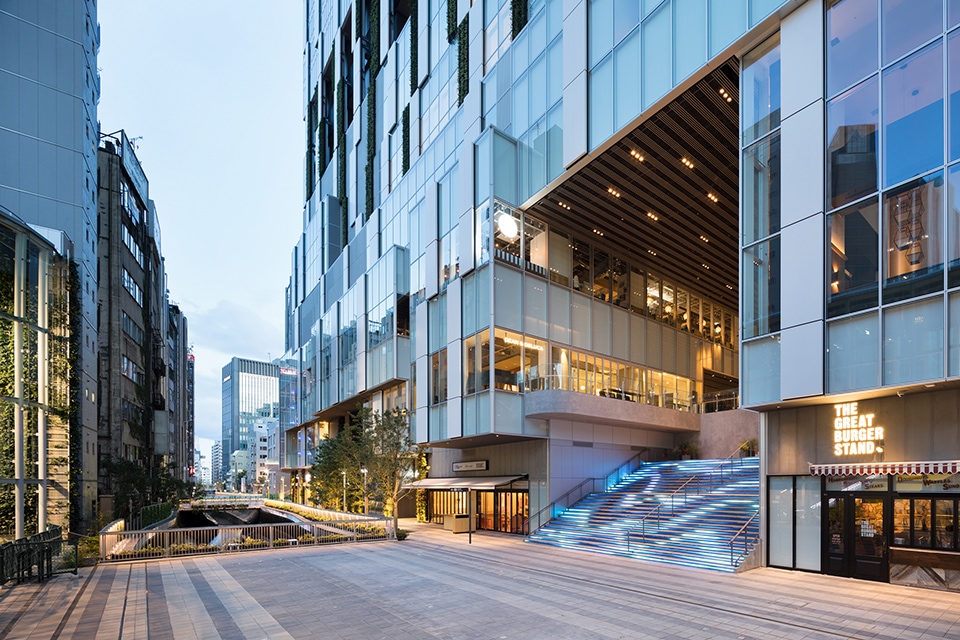 Background of the Presentation

This project aims to continue work done on the “Hakodate Miraikan” and the “Kohtei” done by WOW, as a combination of architecture and media.

When combining architecture and media, both the architecture and the media need permanence. In the internal installations in “Kohtei” light projected from the screens combines with images reflected on the water to create an animation of permanent light. The light dancing off the water invokes different images, stirring the onlooker’s imagination. What is seen may be the same but each individual will have their own visual experience. This is a phenomenon described in detail by Saigyo Hoshi in one of his verses on the form of Buddha:

“A trail of crimson seems to disturb the color of the sky. When the sun shines brightly, the sky appears to become clearer. However, the sky does not become clearer. Nor is the color disturbed. Our hearts are, in this way, like the sky and appearances neither change our heart's color, nor do they leave imprints on its surface. This is the true form of the Tathagata”

Creating this experience in the city is WOW’s solution for merging architecture with media. 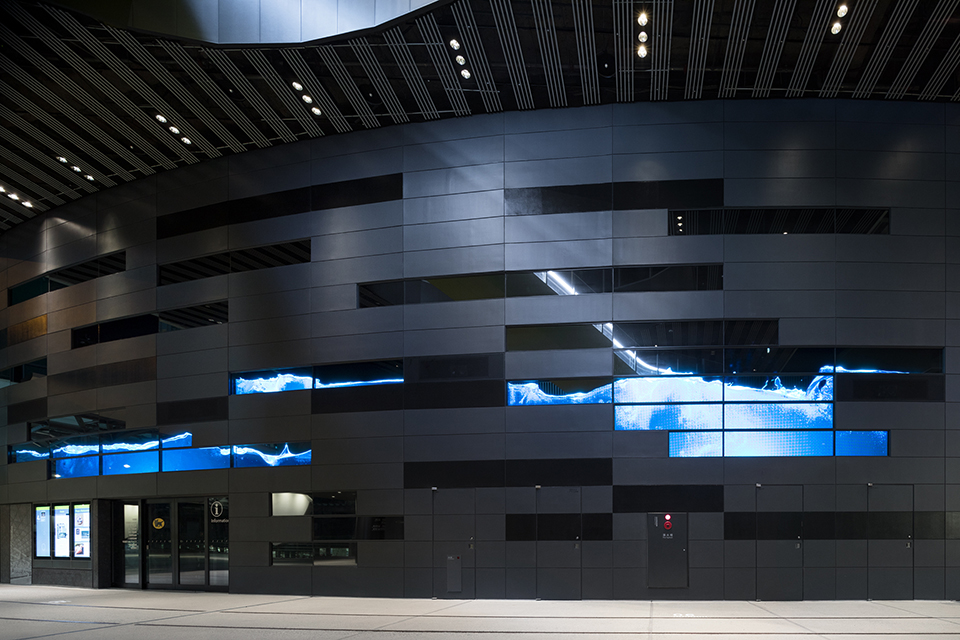 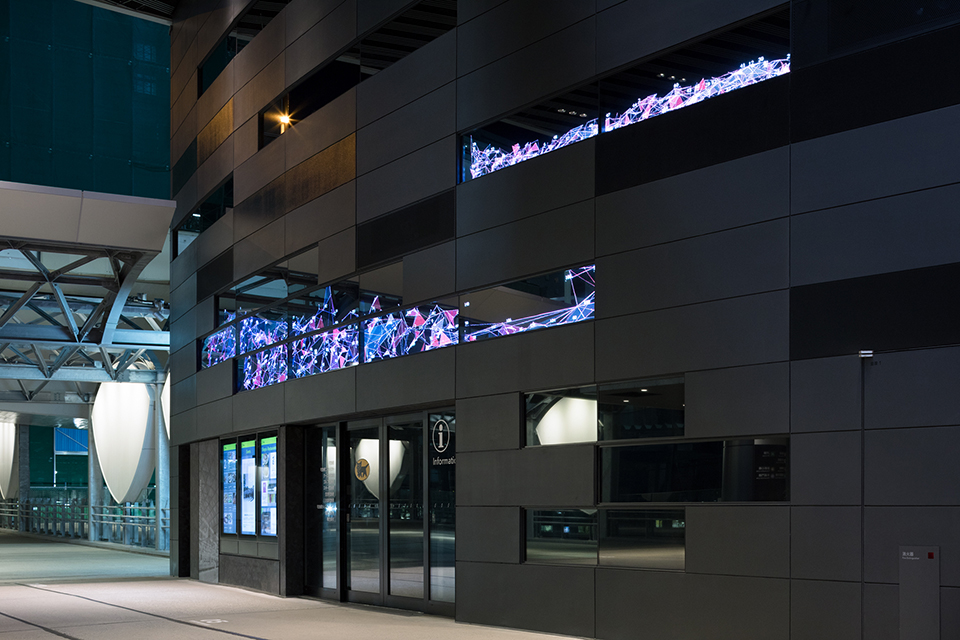 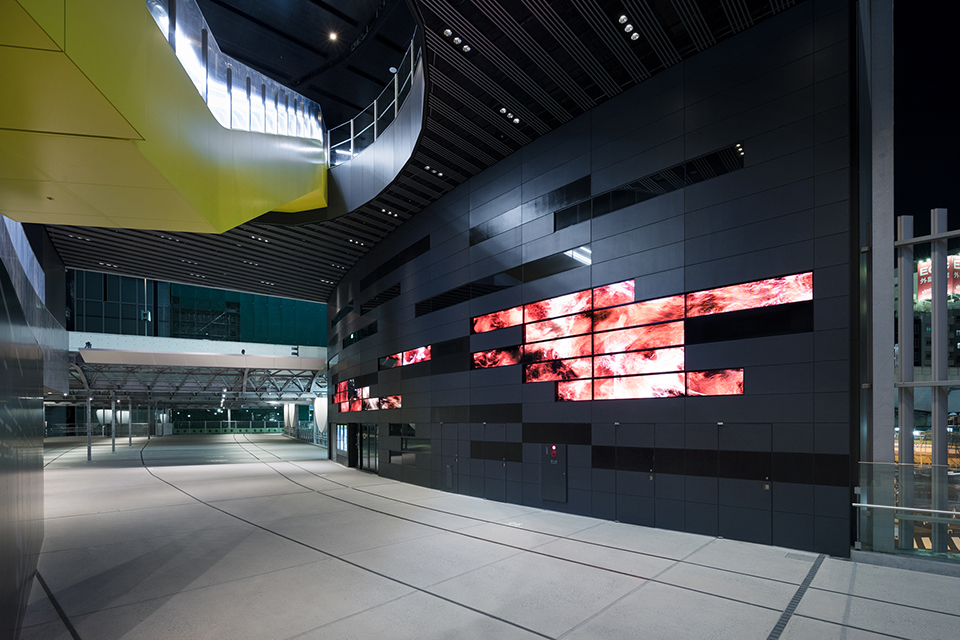 Great care was taken to avoid restricting creativity and talent when designing Shibuya Stream, which would become an iconic facility in the Shibuya Station Southern Area. Regeneration of the Shibuya River Area was already being carried out by the public and private sectors. On the pedestrian deck, we aimed to draw out the innate creativity of people going about their daily lives and people just passing through by creating a natural setting with a “gentle barrier” of sound that would alleviate outside noise.

The concept was called “INNER STREAM” and we created three settings.

1. Invisible Stream - Huge wall projection located in Shibuya Stream’s second floor entrance
Creative workers’ entire thinking process, from conceptualization to completion, is visualized in the form of an “invisible stream”. Using “stream” as a motive, water, rivers, fog, and light are projected along with various study processes from “Finished Work”, computer graphics and programming. The aim is to connect with the onlooker’s power of imagination and enable each individual to have a different visual experience.


2. Fall Stream - Video system embedded into the staircase connected to Meiji Street
Varied projections that surge up into the staircase from a vortex of sound. By using motives of natural phenomena, such as water and waterfalls, it should be space where people wanting to connect with the harmony of Shibuya River can feel at ease.


3. Barrier Stream - Sonic architecture throughout the second floor walkway
Created in collaboration with the musician and sonic artist, Evala. The concept was of a wind blowing across the open space of Shibuya Stream. Furthermore, the sound cancels out the noise from trains and cars which could otherwise be heard in the building. Mixing field recordings from Shibuya River with the sound of the wind blowing through the trees and waves crashing, a highly original melody is created, where the same sound will not be heard twice. By using speakers to block out the noise of the city, an environment which fosters creativity is realized.

evala [See by Your Ears]
Musician, sonic artist
As well as releasing cutting edge electronic music both in Japan and overseas, Evala is a master of the 3D audio sound system. In 2016 Evala started the project “See by Your Ears”, which stimulates auditory experiences. A new musical method of “sonic architecture” is presented whereby sound is constructed in a way that makes it seem alive. 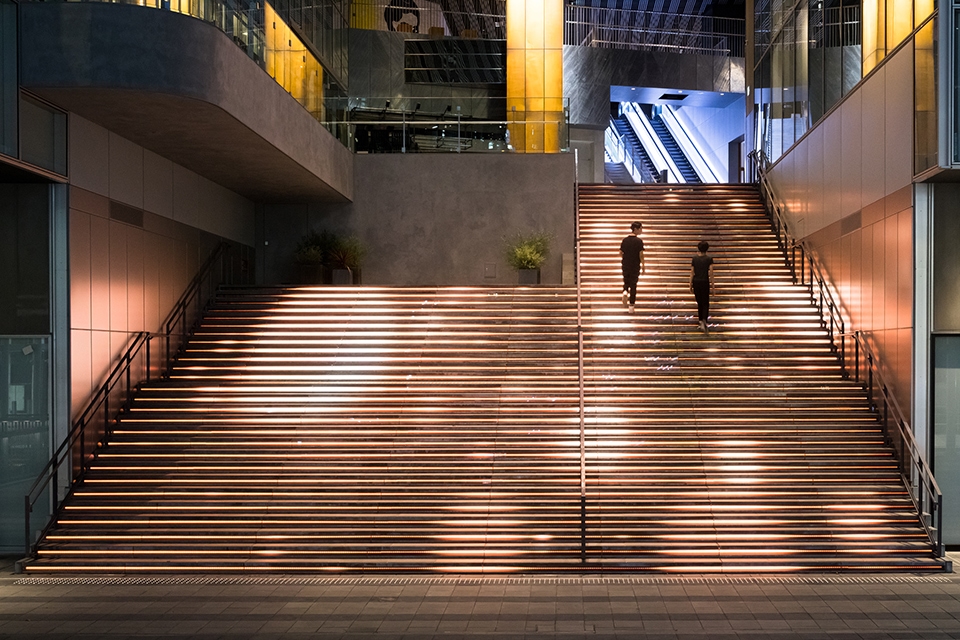 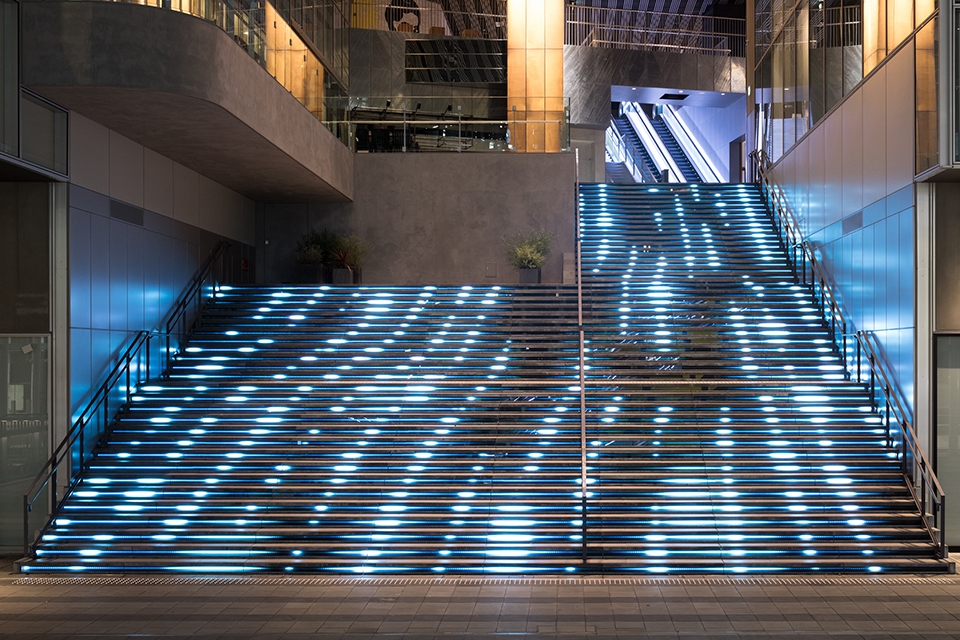 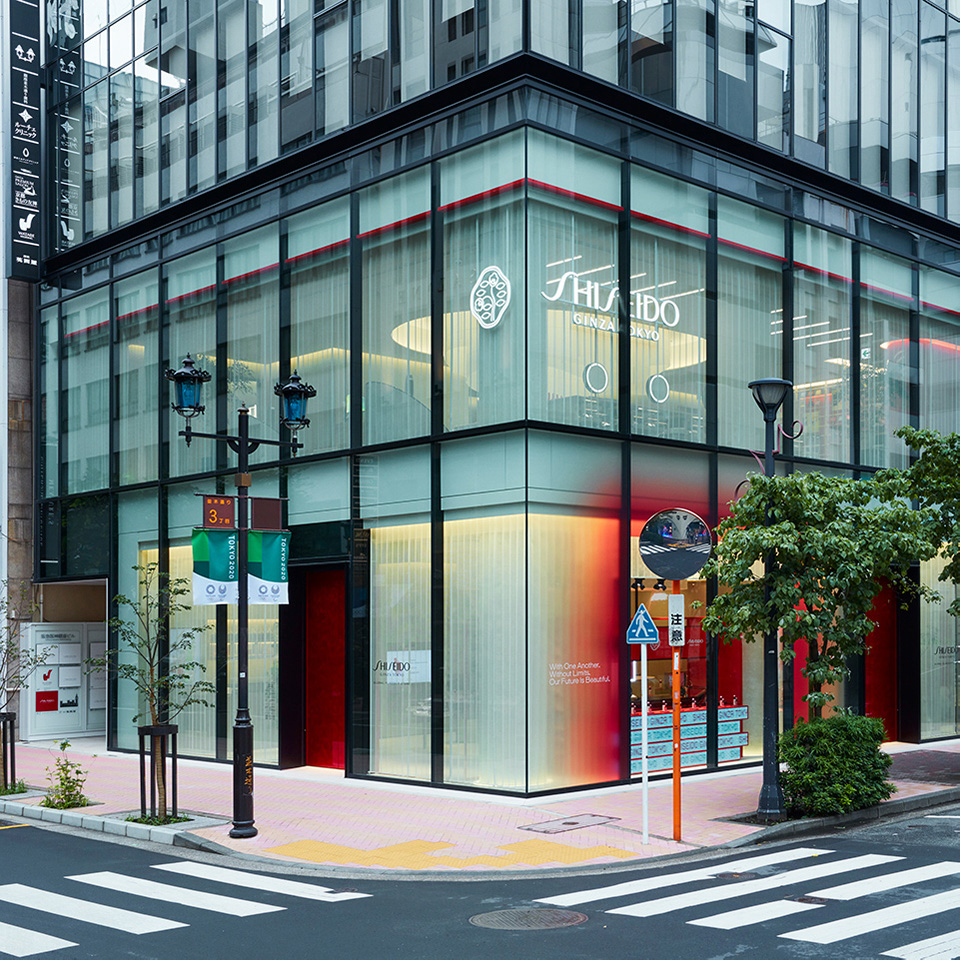 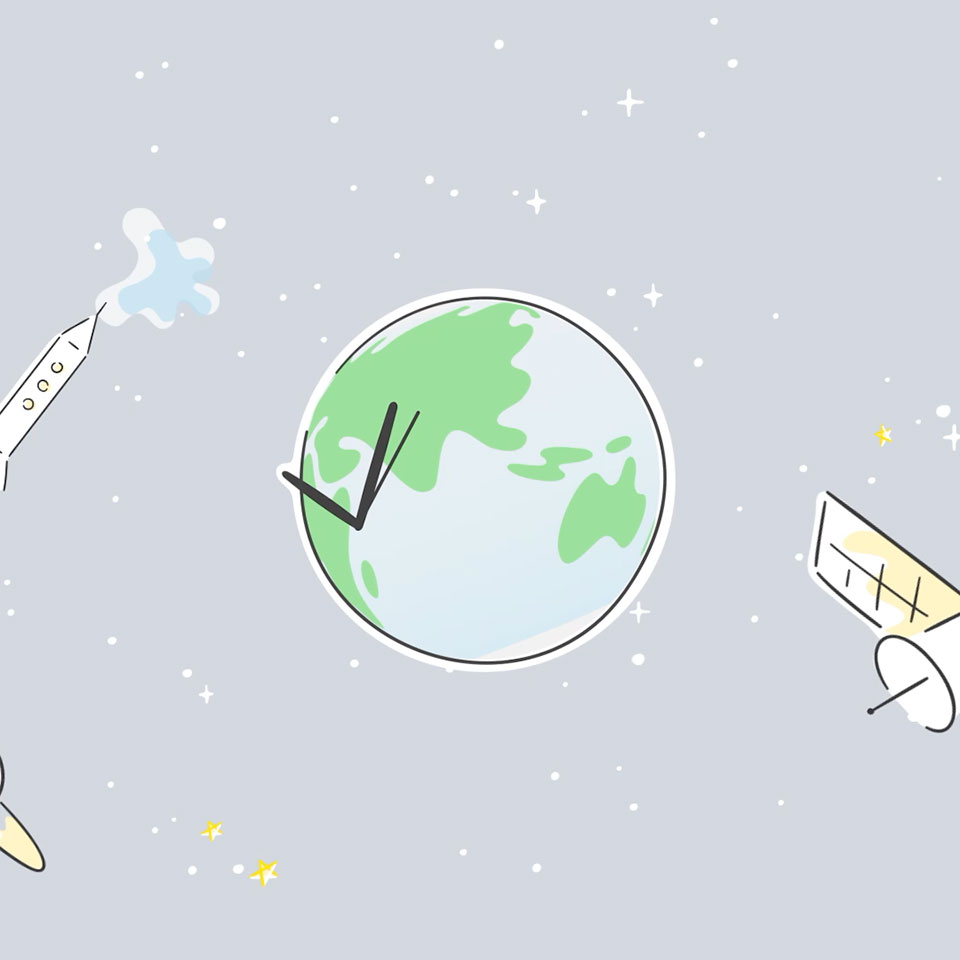